What’s The Meaning Of Those Crazy Colors?

The center of the Arizona flag contains a copper-colored star which signifies that Arizona produces more copper than any other state in the country. The lower portation of the flag is blue or “liberty blue,” which is the same color as the United States flag field of stars. The top part of the flag represents the setting sun’s rays of 13 red and gold alternating stripes. Of course, the 13 sun’s rays are from the 13 original colonies of the United States. Why are the sun’s rays red and gold? Red and gold are the colors carried by Coronado’s Expedition of 1540 to the Seven Cities of Cibola.

The official description of the Arizona state flag.

Who Created The Flag?

In 1910 during a rifle competition, Charles Wilfred Harris, a Colonel in the Arizona National Guard, needed an emblem for their team. He came up with the design of the symbol used by the rifle team. W.R Stewart worked in conjunction with Colonel Harris to design a flag for the rifle competition. Stewart’s wife sewed the first flag for the competition from sketches he made on the back of an envelope. Carl Hayden Arizona’s fir U.S. Representative, was involved with Colonel Harris in designing the first state flag, and his wife Nan Hayden sewed the first state flag.

When Was It Adopted?

Arizona was admitted into the Union on February 14, 1912, and the flag was adopted on February 17, 1917, by the 3rd Arizona Legislature. There were several dissenting votes about the new design, and then Governer Campbell refused to sign the bill.

So now you know the history of the Arizona flag and what those crazy colors mean. One question I always get is which way is up on the flag. If you know the meaning of the colors, then you will know which way it should fly. 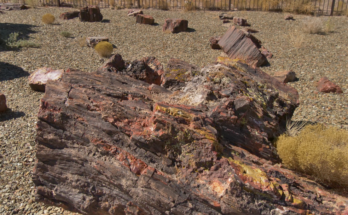 Taking A Drive Down The Petrified Forest National Park Road 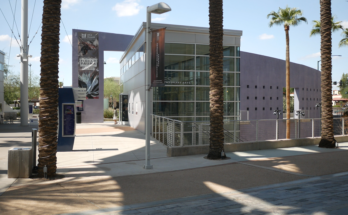 Checking Out The Mesa Contemporary Art Museum and the Great Artwork 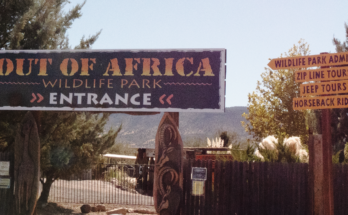 Family Visit to Out of Africa Wildlife Park

Old Town Scottsdale is a great place to explore. I

The Goldfield Ghost Town is a fun place to take th

The Orpheum Theater in downtown Phoenix. A very ni

Enjoying the morning at the arboretum.

Great day in Phoenix. This is the entrance to the

Did the Rockin Taco Fest last night in Chandler Ar