The Phoenix Police Museum tells the history of the Phoenix police department, which started in 1881. The museum contains photographs and equipment used by the police force over the last 130 years.

The museum is located at 2nd and Jefferson in downtown Phoenix. It is at the southwest corner of the Historic Phoenix City Hall on the first floor. The entrance doesn’t look like much, but the inside makes up for it. When I entered, a delightful person greeted me and pointed out many places to visit in the museum. 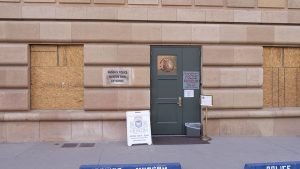 When you enter the museum, the display you will see is a replica of the first marshall office. You will find the Phoenix prison rock outside the marshall’s office. The stone is one of the three original rocks used before they built a prison. Having rocks to chain prisoners to is interesting because in my last blog I wrote about the Wickenburg prison tree, where prisoners were chained to a tree before the Wickenburg jail was built. 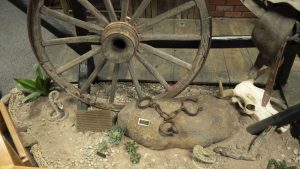 There is a 1919 Model-T police cruiser on display. The Phoenix police department used similar vehicles. Of course, most patrols then were done by foot, bicycles, and horses, but this marks the future of police equipment for Phoenix. 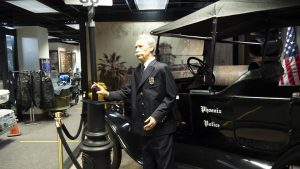 They have a helicopter display in the back of the museum to showcase the aviation side of the police force. In 1974 the Air Patrol Unit was established with just one helicopter. You can’t sit in the helicopter, but you can get close to it and see what it might be like to fly around Phoenix. 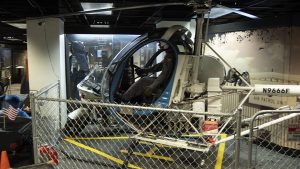 They also displayed a three-wheeled motorcycle and a two-wheeled motorcycle. There is a full-sized patrol car you can get up close to and see inside. I believe before COVID messed life up, you could get into the patrol car, but now they have it blocked off. The lights have a motion sensor, so when you get close, the patrol car lights will turn on, which is fantastic. 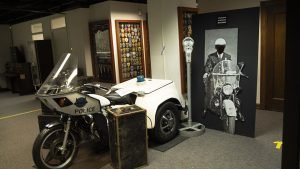 You have heard in many movies the police saying, “You have the right to remain silent.” In the late evening in 1963, a young Phoenix woman was attacked while walking from a bus stop. The Phoenix Police arrested Ernesto Miranda for the assault. The museum has a display detailing what happened to this case, how it went to the U.S. Supreme Court and the decision that impacted the interviews of law enforcement and the suspect.

They also have walls of patches from police departments all over the U.S. It is an extensive collection. 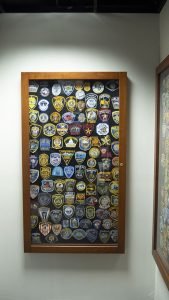 There is a lot of stuff I haven’t mentioned that you can explore—more than I could put into this blog post.

There isn’t a fee to visit the museum, but they have a gift shop full of items you can purchase to support the museum. They have t-shirts, hats, and other things that might interest someone in your family.

If you or your kids are interested in law enforcement, this museum should be on your list of places to visit. It is also a short walk from Chase Field. The entrance might be hard to spot initially but follow the signs on the street. The museum is excellent for the people in your family who enjoy police history. The people who work at the museum are incredibly knowledgeable and happy to share their knowledge.

They don’t have a fee to enter, but they will accept donations to keep the museum going.