I am sure it was interesting to live during the wild west days. In the early years, Wickenburg was a gold mining town and didn’t have a jail, so they used an old mesquite tree to chain a prisoner until the sheriff could take them to the Phoenix jail.

The tree story is set between 1863 and 1890; the town didn’t have a jail to lock up criminals. The prisoner would be shackled to the tree until the sheriff from Phoenix could come to Wickenburg and take them to jail. The prisoner would spend between two and five days chained to the tree. It sounds like a miserable way to spend a few days. I haven’t read if the prisoner was guarded, but it would seem to me it would be easy to escape. Just like the movies, can’t one of the prisoner’s friends come by with the Colt 45 and blast the lock off? The sign on site says, “escapes are unknown.”

At the site today, you will find the old mesquite tree right in the center of town. They have set up a display with a prisoner chained to an old safe. There are signs explaining what happened at the tree and an audio recording you can play with the push of a button. The city has some parking spots right at the display area, making it super easy.

Is the Jail Tree real or just a tourist trap? Wickenburg didn’t have a jail until 1890, so where would they keep the criminals? A jail tree isn’t unique to Wickenburg (see below), and it is possible this story is true. There isn’t concrete evidence that this tree was used as a jail tree. Either way, it makes for a great story and a fun place to take a selfie.

Wickenburg was a gold mining town, and I am sure it was a rough town. Having miners with gold they found, outlaws looking for the gold, and bars serving booze sounds like a place that would need a Jail Tree.

We need to talk about the tree because it is a 200-year-old tree. The tree has its own sign at the site. It was named one of Arizona’s Centennial Witness Trees in 2012. This means the tree was around when Arizona became a state on February 14, 1912.

Gleeson Jail Tree was used in the town of Gleeson, Arizona, before they built a jail.

Paradise Jail Tree is a pair of oak trees with a chain stretched between them. The trees are located in Paradise, Arizona.

Ruby Jail Tree is a Mesquite tree located in Ruby, Arizona, and was used to chain prisoners until they built a real jail to house their prisoners.

It Was Hard To Be a Prisoner During The Wild West.

Trees weren’t the only way a prisoner was chained up if they didn’t have a jail.

The Arivaca Jail was a concrete slab in the ground with chains attached, and the prisoner was bound to the chain.

The Greaterville Jail was just a large hole in the ground. The prisoner was raised and lowered into the hole by a rope.

The Tubac Jail was a post in the ground, and leg irons were used to hold the prisoner.

The Jail Tree is right in the middle of downtown Wickenburg and is a fun place to visit. After visiting the tree, you can walk up and down the streets and visit the many shops and restaurants that make up Wickenburg downtown. 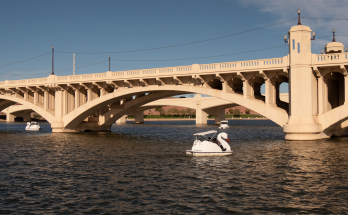